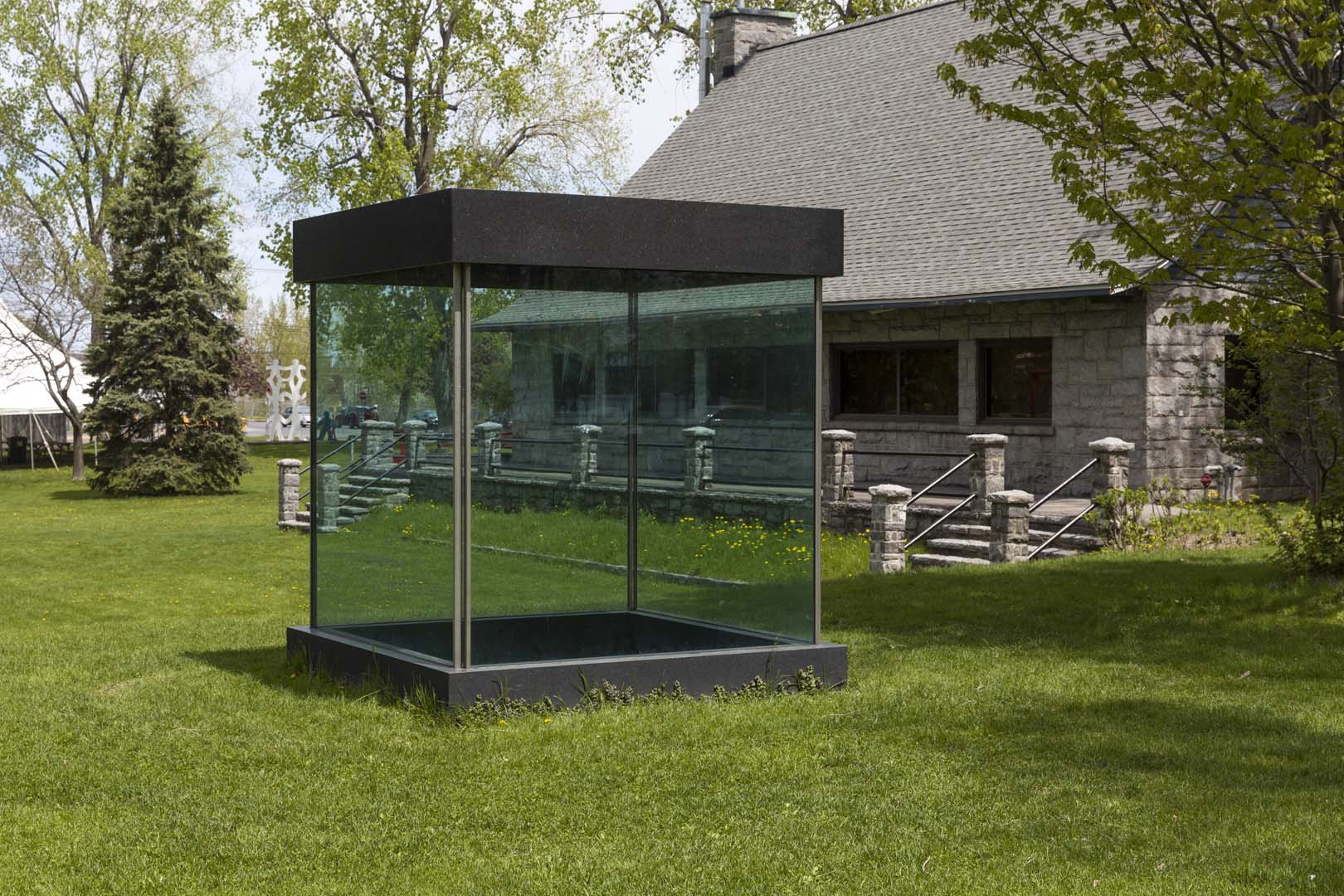 Presentation of the artwork
Situated in the immediate vicinity of the Musée de Lachine and near the canal, Espace cubique ou hommage à Malevitch is a cube formed of four glass panels, a granite base, and a steel plate on top. The space thus enclosed is illuminated by neon lights and cobalt-coloured spotlights.

As its title indicates, the cubic sculpture is a tribute to the suprematist painter Kasimir Malevich. Like other works by Fournelle, Requiem pour un fluide noir – Hommage à Kasimir Malevitch (2000) and Icône (2002), the artist here uses the form of the square, considered the purest geometric figure in suprematist art, to inscribe an affiliation between his work and Malevich’s thought.

Unlike suprematist artworks, however, this artwork is not stripped of all symbolism. The bluish atmosphere inside the cube, visible at night, directly echoes the maritime context in which the artwork is situated. In the artist’s view, it “is related in the broader sense to containers used in ocean transport. The bluish tint of the light sources creates the link with water. . . . In the evening, all lit up, the sculpture serves more as a signal element, like a lighthouse . . .”

1. Project submission (our translation).
Associated events
Espace cubique ou hommage à Malevitch was first on display at the first Salon international de la sculpture extérieure, an event organized by the Centre des arts contemporains du Québec à Montréal in 1992 for the 350th anniversary of the foundation of Montréal. With the theme “Aux quatre vents” (To the Four Winds), this exhibition of monumental and environmental sculptures brought together 12 artworks, created specially for the occasion, on the promenade of the Old Port of Montréal. At the end of the event, Fournelle’s artwork was installed in Parc des Saules in Lachine; in 2003, it was moved to near the Musée de Lachine.
André Fournelle

A prolific producer of artworks since 1965, he has created a number of artworks integrated with architecture, including Un moment vivant (2000), at the Taipei airport in Taiwan, and outdoor interventions such as Spirale (1989), a tribute to Robert Smithson, displayed in the Death Valley desert of California.