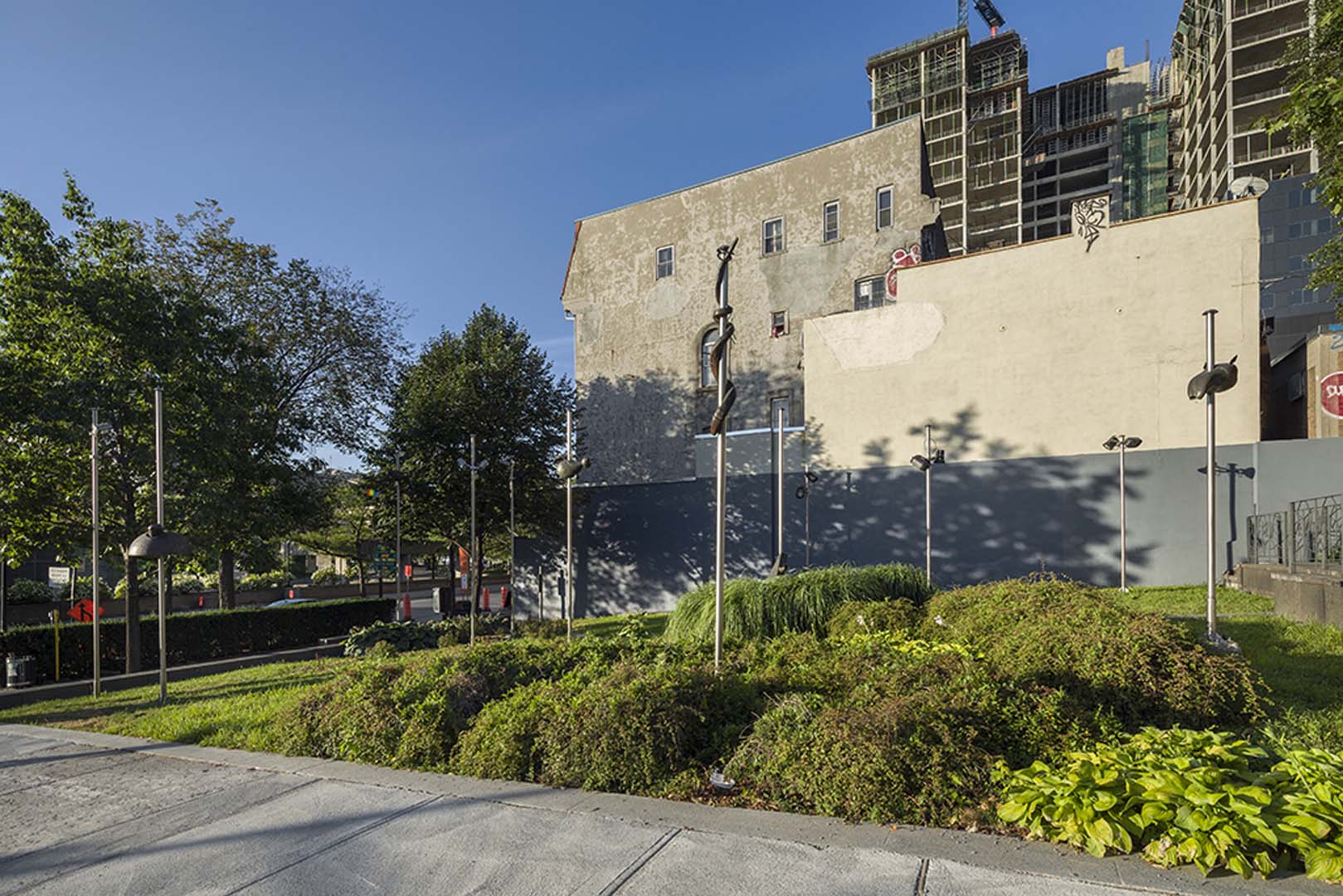 Presentation of the artwork
Le Jardin de Lyon is situated in Place J.-Ernest-Laforce, at the intersection of Berri and Viger streets. It is a jardin de proximité, an approach developed by the Ville de Lyon, on the model of New York’s pocket parks, that consists of transforming small residual spaces into poetic, intimate green spaces. They are generally designed by a multidisciplinary team that may bring together a landscape architect, a designer, and an artist.

Le Jardin de Lyon is a landscape design in which is set a sculptural ensemble composed of 12 stems of stainless steel: half of them support lighting fixtures and the other half bronze sculptures. The sculptures are simplified representations of a ladybug, a bird, a cat, a tooth, a triangle, and a high-speed train. These fanciful figures are inspired by drawings in the book Hobo Signs by Terry Fox, which shows various signs used by hoboes to exchange information on their experience of the urban space. With its carpet of indigenous plants, its framing, and the tall stems emerging from the ground, the garden evokes an oversized butterfly box, with the sculptures becoming strange insects. In Jean-François Gavoty’s view, the arrangement extends “the forest of signs that the city offers us.”
Associated events
The redevelopment of Place J.-Ernest-Laforce took place in the context of the 20th anniversary of the exchange and cooperation protocol between the cities of Lyon and Montréal. At the same time, a Montréal team composed of sculptor Michel Goulet; Réal Lestage, urban planner with Daoust-Lestage; and Julie Saint-Arnaud, landscape architect with Vlan, created Le Jardin de Montréal in Lyon.
Jean-François Gavoty

Jean-François Gavoty studied at the architectural school in Grenoble. He then became a restorer of sculptures and murals, and he taught art history, design, and fine art. In 1990, the Musée d’art contemporain had an exhibition of his works. The following year, Gavoty participated in the Biennale d’art contemporain de Lyon. His artworks have been presented in Germany, Austria, and Sweden. He produced a series of sundials that are on permanent display in different sites and buildings in France, including the Lycée Robert Doisneau, Collège Élie Coutarel, and the Saint-Barthélémy chapel.
Guerric Péré