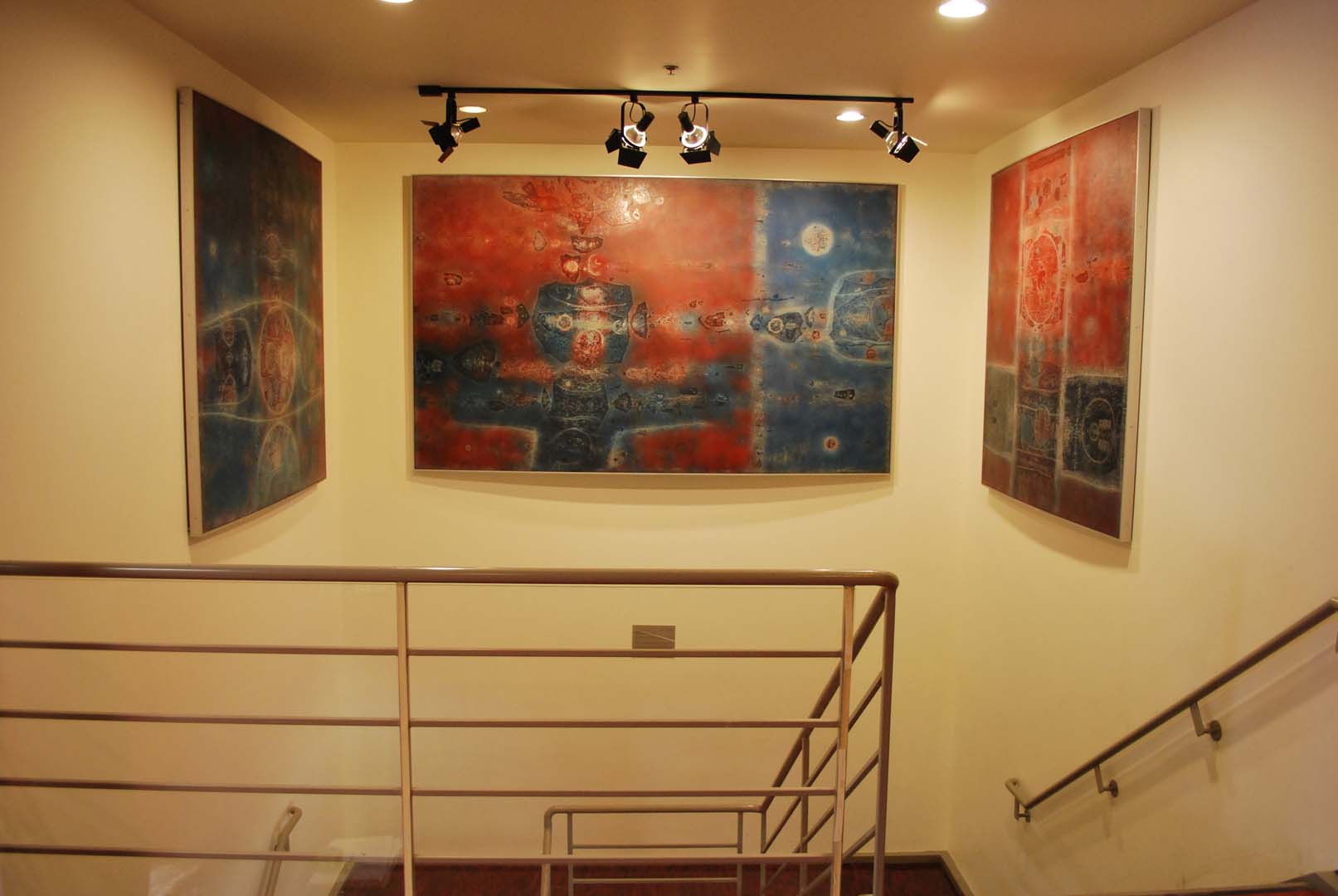 Presentation of the artwork
The mural is on the wall of the stairs leading to the library’s first floor. It is fully visible from the upper floor, as the ground floor offers only a low-angle view.

It is a three-part mural painted in oils and composed of different materials glued to the canvas (fishing line, tissue paper, pieces of fabric). A network of organic elements circulates through the three parts of the mural like particles in orbit. They originate randomly directly from the colour “applied in successive layers and rubbed, worn, and eroded to express millennia of wear of matter” (Jacques de Tonnancour, quoted on the identification plate [our translation]). The result is abstract forms in a sidereal space in which two worlds in perpetual tension, symbolized by the red and blue colours, are balanced.

This artwork by de Tonnancour, who is known for his great interest in natural elements, is part of a series of fossil-paintings through which the presence of the landscape stands out: “The space of the landscape, the endless plain, is thus transposed into patinaed planks imprinted with exhumed codes, geological and cosmic discoveries.”1 Presented in the artist’s retrospective at the Musée d’art contemporain de Montréal in 1999, it is, according to experts, a masterpiece in his pictorial production.

Associated events
The mural was commissioned in 1965 by Dow O’Keefe to decorate the lobby of the Dow Planetarium (sponsored by Dow O’Keefe). It was therefore a gift to the Ville de Montréal. Following renovations to the planetarium and given the mural’s advanced state of deterioration, the artwork was withdrawn from its original site and put into storage. In 1999, the Musée d'art contemporain de Montréal restored the mural to include it in the retrospective of Jacques de Tonnancour’s work (June 17–November 21, 1999). It was then installed in the new Pointe-aux-Trembles Library.
Jacques De Tonnancour

Jacques de Tonnancour studied at the École des beaux-arts de Montréal from 1937 to 1940, and then continued his training at the Montreal School of Art and Design, where his advisor was Arthur Lismer, member of the Group of Seven. In 1948, he wrote the manifesto Prisme d’yeux (co-signed by a host of artists, including Alfred Pellan). He became a professor at the École des beaux-arts in 1954 and taught at UQAM until 1982. Late in life, he devoted himself to his passion for entomology. He created several artworks integrated with architecture, including at the Place-Saint-Henri Métro station and at the Université de Montréal.
Awards and honours
Detail
Variation of title
Murale peinte; Cosmos I, II, III
Category
Fine Arts
Subcategory
Painting
Collection name
Integration with architecture
Date completed
1966
Mode of acquisition:
Donation
Accession date
January 1 1965
Technique(s)
Collage; painting
Materials
Wood; fabric; nylon; paper
Support
Canvas pasted onto plywood
General dimensions
185 x 677 x 5 cm
Mediums
Cosmos
Borough
Rivière-des-Prairies–Pointe-aux-Trembles
Building
Bibliothèque de Pointe-aux-Trembles
Civic address
14001 Rue Notre-Dame Est, Montréal, QC H1A 1T9
In the same borough
Rivière-des-Prairies–Pointe-aux-Trembles