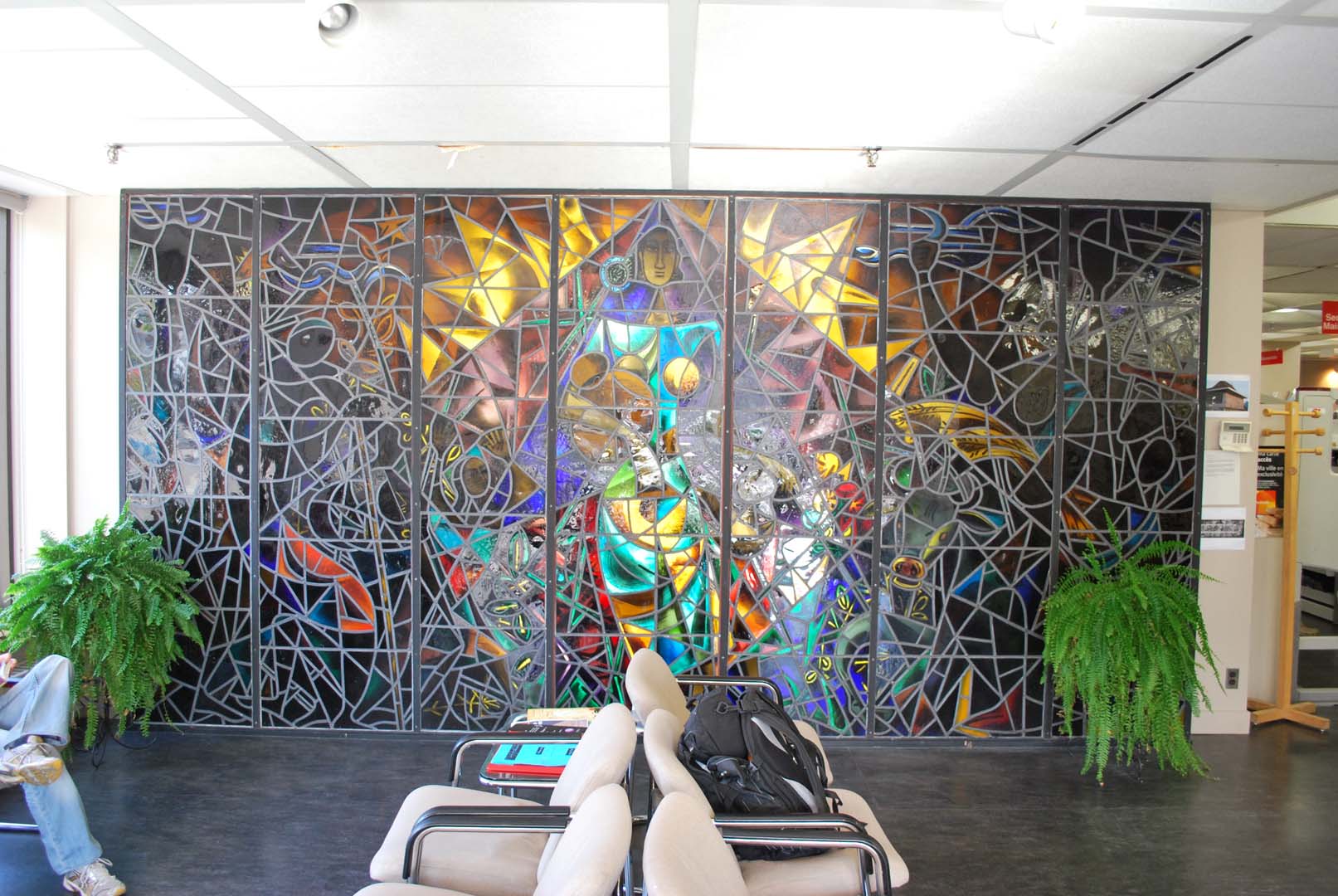 Presentation of the artwork
The large, luminous stained-glass piece adorns the reading room of the adults’ library on the building’s ground floor. Visible from the street through large bay windows, it is notable for its monumental size as well as its special aesthetic qualities.

Lanka Mata, or “Mother Lanka,” is an allegorical work with cubist accents. In the centre of the triangular composition is a female figure who carries a symbolic object on her hip. The artist describes his work this way: “The central figure is a village woman shown with a water pot. The water pot, or kalasa, is a symbol of plenty, filled and carried by a village girl returning from the well.” 1 Around the figure of the mother country are figures with rural attributes and animals. Two panels representing the sun and the moon are not integrated into the current stained-glass window; they are in storage.

Lanka Mata was originally a painting on canvas by George Keyt, and it was reproduced in glass at the Whitefriars Stained Glass Studios (United Kingdom) at the request of the Ceylonese authorities. After Expo 67, the diplomats decided to offer the work to the Ville de Montréal rather than repatriate it to Ceylon given the complexity of transporting it. The artist therefore never had an opportunity to see his work reproduced in stained glass. The original canvas that served as its model is lost.

1. George Keyt, A Centennial Anthology (George Keyt Foundation, 2001), p. 163. This book on the artist’s complete production was presented to the Ville de Montréal as a token of appreciation by Tissa Devendra, a close friend of the artist’s. Devendra made an attempt to find the work, of which the artist no longer knew the whereabouts, and in the course of his research he was led to Bibliothèque Marie-Uguay in 2010.
Associated events
Lanka Mata was initially designed to be placed on the façade of the Ceylon (now known as Sri Lanka) pavilion at Expo 67. When the pavilions were dismantled, the work was offered by the Ceylonese authorities to the Ville de Montréal as a token of appreciation. In 1982, following expansion of the Bibliothèque Monk, renamed Marie-Uguay, the artwork was finally installed permanently in homage to the Montréal poet.
George Keyt