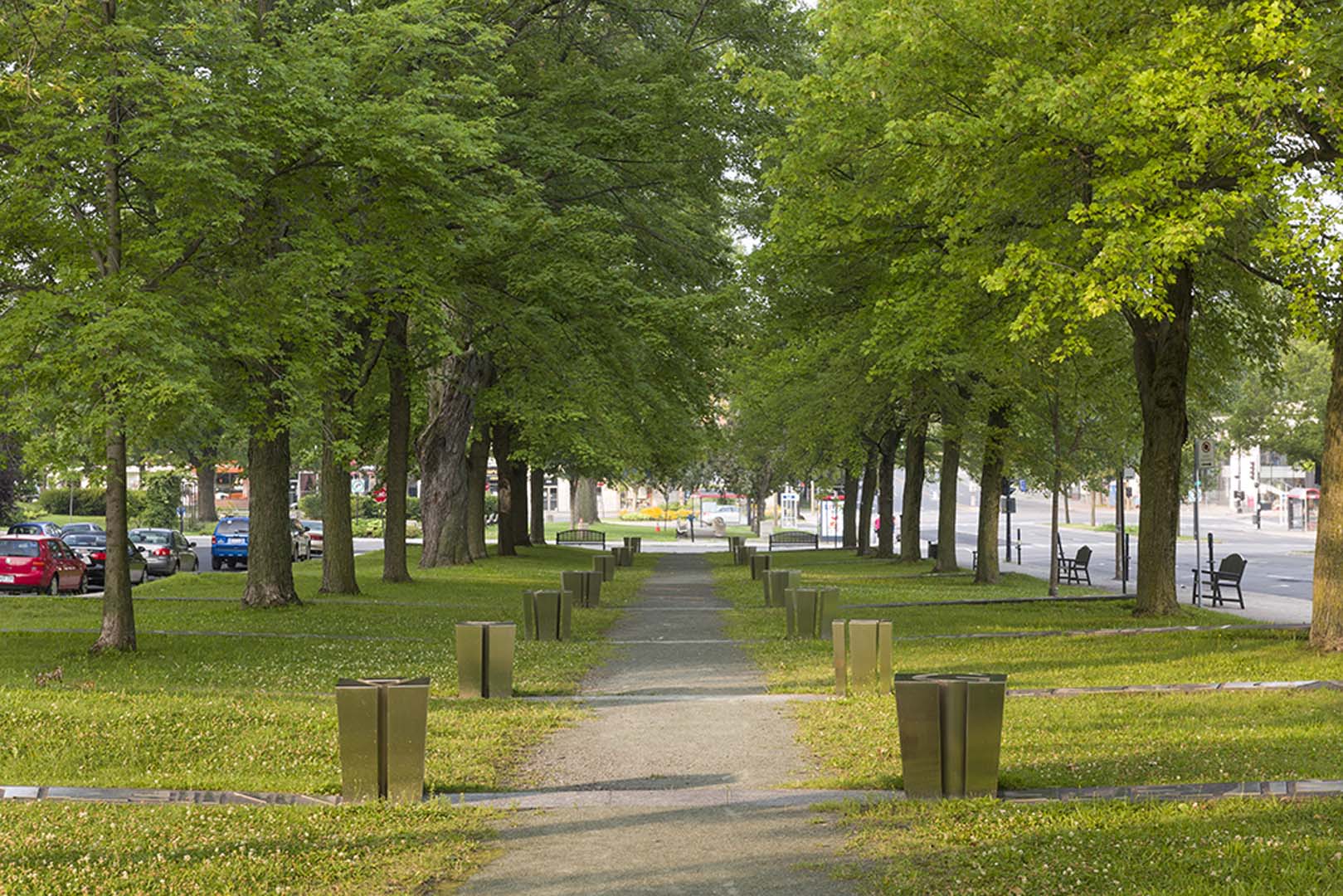 Presentation of the artwork
A monument to the memory of the victims of the tragedy at the École Polytechnique de Montréal, Nef pour quatorze reines completely occupies the site and suggests a time to pause. Fourteen blocks are each linked to a band of black granite bearing the name of one of the victims: Geneviève Bergeron, Hélène Colgan, Nathalie Croteau, Barbara Daigneault, Anne-Marie Edward, Maud Haviernick, Barbara Klucznik-Widajewicz, Maryse Laganière, Maryse Leclair, Anne-Marie Lemay, Sonia Pelletier, Michèle Richard, Annie St-Arneault, and Annie Turcotte. The blocks are placed along the entire length of this long, narrow space, encouraging passersby to stroll down a path of reflection and meditation.

The first and last names of the 14 women take form in the negative spaces of the letters – a symbol of absence – and through the contrast between the stone and stainless steel, evoking, respectively, commemoration and the profession of engineer. Engaged in a slow reading of the letters, the viewer gradually reconstructs the identities of the victims as a way of bringing back from the void the traces of a perceptible memory. Through the reader’s individual experience, the artwork subsumes the women’s identity and fate beneath important collective issues such as non-violence, respect, and memory.

“Our artwork is a memorial that integrates the site and the monument into a single commemorative gesture in memory of the 14 young women. The evocation of those who have died becomes the site and the site becomes a place of memory. The memorial invites pedestrians to a form of communication that is both visual and spiritual, that places at the centre of a landscape a commemorative event and a site of meditation and contemplation” 1 (1999).

1. Rose-Marie Goulet, quoted in Communiqué du Service de la culture de la Ville de Montréal, 6 May 1999 (our translation).
Associated events
The artwork commemorates an infamous event in Canadian history: on 6 December 1989, 14 female engineering students were murdered by a misogynistic gunman. In 1999, to mark the tenth anniversary of the event, on the initiative of the Fondation des victimes du 6 décembre contre la violence and the Ville de Montréal, a park was created in the Côte-des-Neiges neighbourhood close to where the tragedy took place, and it now contains Rose-Marie Goulet’s Nef pour quatorze reines, an in situ commemorative installation.
Rose-Marie Goulet

Rose-Marie Goulet has produced numerous works of public art in Québec. Educated at the Université du Québec à Montréal (bachelor’s degree), Concordia University (master’s degree), and the École nationale supérieure du paysage de Versailles (internship), she focuses her art practice on the visual aspect of words so as to distance them from their linguistic meaning and transform the space in which they are found. Among her important artworks are Monument pour A at the Centre des congrès de Québec and Effets publics at Concordia University, a group project of integration of art with architecture.
Awards and honours
Marie-Claude Robert