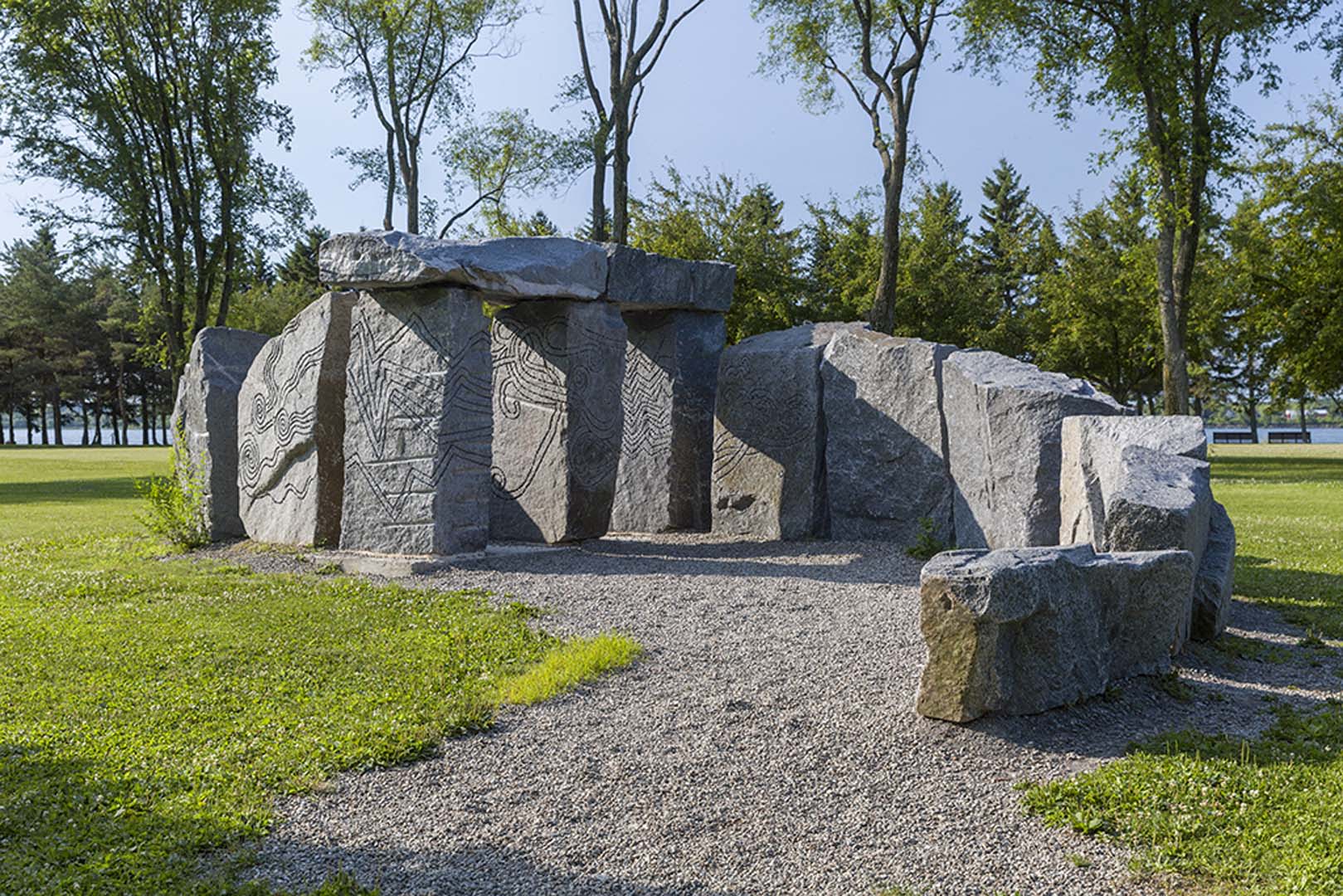 Presentation of the artwork
In the spirit of its predecessor, Vortexit II maintains an unusual relationship with its environment. Between Lake St. Louis and the Lachine Canal, two series of natural rocks of increasing size are placed at the edge of a curving path and converging at an edicule, composed of three pillars and two lintels, through which passersby can cross.

The word “vortex” describes whirlpools that fluids create when they flow, and the title of the artwork emphasizes the many references to movement in the artwork. Curves, zigzags, and spirals engraved into the stone by sandblasting, evoke, for example, the movement of the nearby river that is historically associated with the development of Montréal. The curving path refers to viewers’ wanderings through the space.

The central edicule is in the form of a dolmen, a prehistoric monument made from two vertical rocks and one horizontal rock forming a shelter. Like a rite of passage, the dolmen encourages opening and favours the integration of human beings with their environment. Vortexit II thus traces the path of a prehistoric memory to be revealed.

This large artwork, inseparable from its site of exhibition and made from natural materials, is related to land art, an American and European art current initiated in the late 1960s. Land art expresses the desire to take art out of the museum by proposing interventions in outdoor sites. This artwork is unusual because it is easily accessible, whereas traditionally land-art works have been destroyed or are in sites that are difficult to access.
Associated events
Vortexit II is installed at the exact site of Voxtexit, a work that Vazan created during the Symposium de sculpture “Un lieu” in 1988. Organized by the Centre des arts contemporains du Québec à Montréal, the symposium held in Lachine brought six new works into the Lachine borough collection. Irreparably damaged, Vortexit was dismantled in 2009 to make way for the new work that the Ville de Montréal commissioned from the artist.
Bill Vazan

Born in Toronto, Bill Vazan is a multidisciplinary artist who has lived and worked in Montréal since 1957. He received his education at the Ontario College of Art in Toronto, the École des beaux-arts de Paris, and Sir George Williams University in Montréal.

Vazan was the first Canadian artist to devote himself to the production of land art in Canada. Many of his artworks are in Québec, including Outikan Meskina in Chicoutimi (1980) and Réduire in Mont-Tremblant (2003), and abroad, including Pierre ardente in Israel (1987) and Worldworks in Chile (2005).