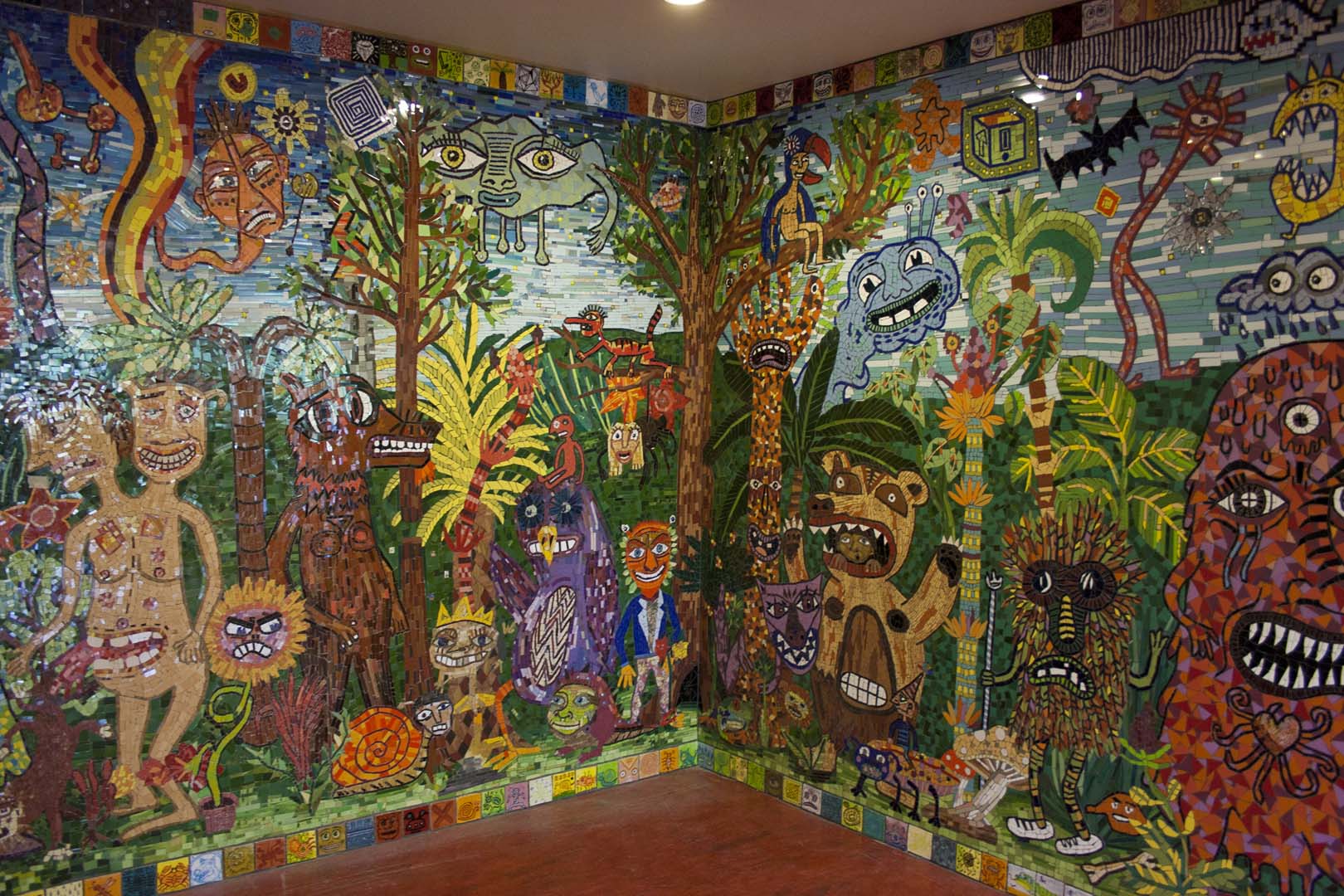 Presentation of the artwork
The immersive mural is deployed on two full walls situated at the entrance to the youth section of Bibliothèque de Pointe-aux-Trembles, creating a setting that stimulates users’ imaginations.

Composed of pieces of coloured ceramic, glass tesserae, and mirror pieces, hand-cut by the artists, Le grand rassemblement portrays a lush jungle bursting with playful characters: for instance, a tree spies on a lumberjack with a gold tooth and a headdress, and a flower waves at a two-headed figure whose belly spits blood.

Between the poetic and the grotesque, the work contains details that create improbable scenes related to comic books, video games, and popular culture. The bright colours lighten the tone by creating a contrast with some of the frightening characters.

Associated events
The project was created in the context of the L’art public dans les arrondissements de Montréal initiative launched as part of implementation of the City of Montreal’s Cultural Development Policy, with the goal of encouraging greater accessibility to arts and culture.
Allison Moore

I am an artist, and cultural operator based in Montreal. I employ various materials in my artistic production, primarily video and drawing. I use both traditional methods with advanced technologies to search out new systems of presenting my work. including interactive video projects, video games, puppet performance and drawing installations. My medium does not dictate my ideas, but rather my ideas dictate the medium. My work is socially and politically conscience. I try to include a level of absurdity, humor and surrealism - in an effort to connect the natural, truisms in life to the uncanny, supernatural and mystic. My directive is in alternative storytelling, and in cultural observation.

Originally from the Pacific Coast of Canada, I am now located in Montreal and have produced projects in Brazil, Ecuador, United Kingdom, Europe and North America. I became interested in the field of Digital Media while pursuing a BFA degree in Interdisciplinary Arts at the University of Concordia. After graduating in 2005 I traveled to Ecuador, to attend "The World Summit on Evolution" in the Galapagos Islands, and work with a documentary film crew. I have since worked on various film productions, in documentary, feature and experimental formats. For the past six years, I have evolved my practice through participation in residencies, workshops, exhibitions and festivals locally and internationally.

I am an active member of Graff Printing Studios and have developed new projects in video, animation and interactive computing as an invited artist at Studio XX, Oboro New Media Labs and the Society of Arts and Technology in Montreal. My projects at Studio XX focus on using open source media tools in such as Pure Data, Arduino, and Blender 3d Game engine to create new media installations. I am co-founder of Egotrip Productions with Arthur Desmarteaux, collaborating together since 2006 to produce puppet performances, public art and exhibitions.

In the summer I instruct classes in digital cinema at the Gulf Island Film and Television School (GIFTS) in BC. I was a mentor for Visual Effects, Animation, Drama, and Advanced Director casses.
Awards and honours
Arthur Desmarteaux